What I Learned About the Hour of Code

This is not a perfect post. I'm not sure if it will ever be a perfect post, but it something that has been swimming around my head for the past week, because I guess I'm still trying to process it. So, it is just a post. It won't be eloquent, there might not be a conclusion (sorry ELA teacher friends), maybe it's best to qualify it as an observation and insight. 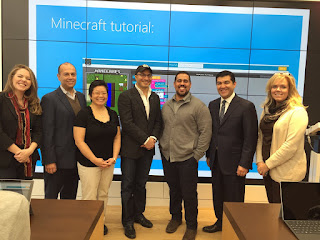 I had the honor of being invited to kick off Computer Science Education Week (#CSEdWeek) at the flagship Microsoft Store in NYC. The event was wonderful, and I was privileged to be part of a panel that included Hadi Partovi, Emily Reid, and my friend, Chris Aviles.

In just 3 years, the Hour of Code and the resulting movement to teach CS in schools, has become mainstream. It was incredible to see all the blog posts, and social media posts depicting kids (A LOT of them) and adults, thrilled about learning coding. I still have some #latergram pictures to share (everything's a #slowchat for me).

After the main HOC event last week, I had the opportunity to lead the Minecraft Hour of Code tutorial to a group of high school kids from Brooklyn. I assumed they had heard of HOC. They had no idea what I was talking about. I assumed they would be proficient working on the Surfaces. They were for the most part able to use the touchpad, and their minds were blown that the Surface had a touchscreen. In my world, EVERYONE has played, or at least heard of Minecraft. I don't think either was the case for these kids.

After the hour, there were a handful of kids that got it, and loved the experience, while many others didn't, and I'm not sure that they even got why they were having the experience. I did some research afterwards, to learn that the school is a low performing school, having been closed and reopened by the city. It made me wonder about all the things I (we) take for granted: access to technology, being connected, how to motivate students.

I'm still processing, but the experience definitely opened my eyes to why so many educators are leading campaigns to spearhead digital equity. I just didn't get it until last week.
Posted by Cathy Cheo-Isaacs at 8:15 AM